Temporomandibular Disorders (TMD) generally occur as a result of problems with the jaw, and the surrounding facial muscles.  The disorder is often incorrectly referred to as TMJ which stands for Temporomandibular Joint.  This is the joint involved in the jaw, and injury to the joint is often attributed to the onset of the disorder.  Other causes of TMD are often cited as:

Fortunately most all of these issues, as well as the dealing with the actual pain itself, are areas in which scholarly, clinical research studies have documented the benefits of hypnotherapy.  Additionally they have cited it as a very viable solution for dealing with the issues of TMD.

The TMJ is well known to be a very complex joint, however many may be surprised to learn that it is often a key point in hypnotherapy sessions when dealing with pain in other parts of the body, or even in general stress and anxiety sessions.  In fact at more progressive treatment facilities where the use of hypnosis for pain management is more “front line” such as the UCLA School of Dentistry, Orofacial Pain Clinic, staff psychologist Dr. Don Goodman addresses this specifically when teaching pain management to hypnotherapists.  So while the theories and mechanisms of how the Temporomandibular Joint can exacerbate issues in other areas body is beyond the scope of this particular article, the question becomes with so much focus being placed on it in hypnotherapy sessions, how effective is hypnosis at working with the actual TMD disorder itself?

While a quick search of Google Scholar or Pubmed will reveal perhaps a thousand studies citing the efficacy of hypnotherapy in the abatement of TMD symptoms, this article will address the findings of one study which is particularly interesting because of the type of subjects used in the study.  The researchers chose to use patients who were quote, “recalcitrant to conservative treatment.”  In other words they did not respond to medication and wore through several occlusion splints.  With this in mind, the researchers therefore felt that any positive effects produced by the hypnotherapy sessions should be considered especially compelling.

The patients in the study ranged in age from 20 to 52 years of age, and were seen in groups which ranged in size from 3-8 at a time.  As each person is different, and each person’s suggestibility is different, arguably a group session doesn’t give the hypnotherapist the luxury of tailoring the session to each person, however even with group sessions the patients did very well.  Six sessions were scheduled for once a week, and treatment groups were conducted throughout the year so effects such as holidays, and changes in climate would not influence the data.

The first session was completely devoted to explanations of TMD and the participants “were given a basic understanding of hypnosis and trance to dispel the many myths and distortions of hypnosis often created or exacerbated by the media.”  They were also given examples of the power of the mind in gaining control over what are typically thought of as unconscious physiologic processes; however no formal hypnotic induction was performed in the first session.  While the researches didn’t cite a reason, it may have been due to working with groups instead of one-on-one, and the extra time needed for explanations and questions.

Sessions two through five were actual hypnotherapy sessions dealing with the participants' TMD.  Additionally session six was cited as being similar to sessions two through five, however posthypnotic suggestions were also given for relapse prevention.  Additionally instructions for self-hypnosis were given at the end of each session for reinforcement of suggestions given by the hypnotherapist.

The results of the study were very favorable and cited the following in part.  Three separate analysis of variance tests (ANOVAs) showed significant results for the medical hypnosis treatment effect for reduction in pain frequency (Fig. 1), pain duration (Fig. 2), and pain intensity (Fig. 3).  Additionally, quality of life, or as the paper cites, “improvement in daily functioning” was also ranked.  The participants cited on average a 71% increase of improvement after treatment, and an 80.45% improvement at 6-month follow-up.  Lastly, while it was not quantified, it was noted that even though these patients had not previously responded to their traditional medical treatment, those who were using their splints exhibited much less wear on the device.

While the numbers above are impressive, depending on the way you take in information, to some people they are also very abstract.  As has been said, “a picture is worth a thousand words,” therefore the following graphics as referenced above will more accurately illustrate the results. 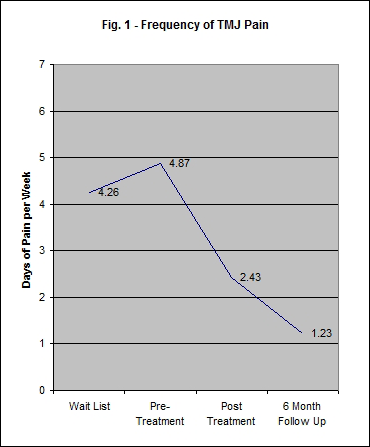 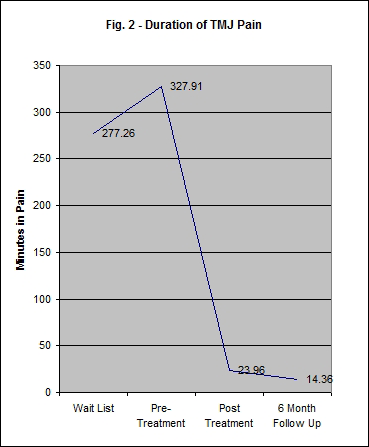 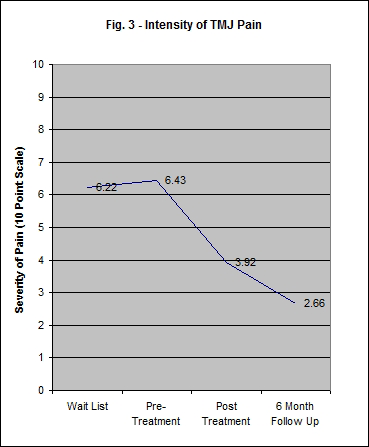 The study also tracked outpatient visits for pain and ranked the findings as “highly significant.”  Using a standard metric of $140.00 per outpatient visit to a multidisciplinary pain clinic, the study cited an average $700.00 savings per patient over the 6 month trial period.  Additionally the researchers tracked the participants' TMD prescription use.  This included all TMD related medications, not just analgesics.  This, just as with medical visits, documented a reduction in need, translating to a cost savings to the patient. As was stated earlier, this clinical study is just one in a long list that have documented the efficacy of hypnotherapy for increasing the quality of life for those dealing Temporomandibular Disorder or TMD.

If or someone you know is dealing with TMD issues, and would like to find out more about hypnotherapy, feel free to contact us online, or call the office at 469-225-9040.

As with any pain or medical condition, please note that only your doctor is qualified to evaluate your condition and render a diagnosis.  Therefore a medical referral is required for any sessions related to TMD.